The artificial neuron receives input from one or more sources that may be other neurons or data fed into the network. This input is usually floating-point or binary. Often binary input is encoded to floating-point by representing true or false as $1$ or $0$. Sometimes the program also depicts the binary input as using a bipolar system with true as $1$ and false as $-1$.

When input data comes into a neuron, it gets multiplied by a weight value that is assigned to this particular input. These weights start out as random values, and as the neural network learns more about the input data the network adjusts the weights based on any errors in categorization that the previous weights resulted in. This is training the neural network.

In the above equation, the variables $x$ and $\theta$ represent the input and weights of the neuron. The variable $i$ corresponds to the number of weights and inputs. You must always have the same number of weights as inputs. The neural network multiplies each weight by its respective input and feeds the products of these multiplications into an activation function that is denoted by the Greek letter $\phi$ (phi). This process results in a single output from the neuron.

Not every neural network will use every kind of neuron. It is also possible for a single neuron to fill the role of several different neuron types.

There are usually four types of neurons in a neural network:

Recurrent neural networks make use of context neurons to hold state. This type of neuron allows the neural network to maintain state. As a result, a given input may not always produce the same output. This inconsistency is similar to the workings of biological brains. Consider how context factors in your response when you hear a loud horn. If you hear the noise while you are crossing the street, you might startle, stop walking, and look in the direction of the horn. If you hear the horn while you are watching an action-adventure film in a movie theatre, you don't respond in the same way. Therefore, prior inputs give you the context for processing the audio input of a horn. 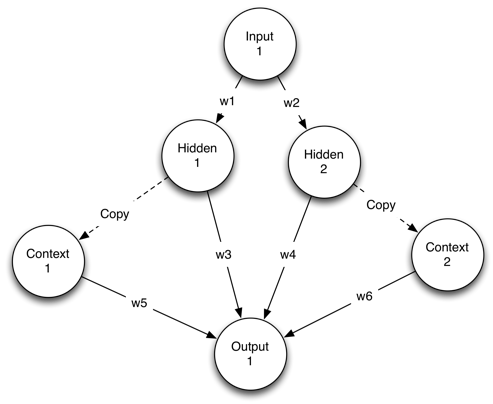 Bias is just like an intercept added in a linear equation. It is an additional parameter in the Neural Network which is used to adjust the output along with the weighted sum of the inputs to the neuron. Moreover, bias value allows you to shift the activation function to either right or left, which may be critical for successful learning.

Consider this 1-input, 1-output network that has no bias:

The output of the network is computed by multiplying the input (x) by the weight (w0) and passing the result through some kind of activation function (e.g. a sigmoid function.)

Here is the function that this network computes, for various values of w0: 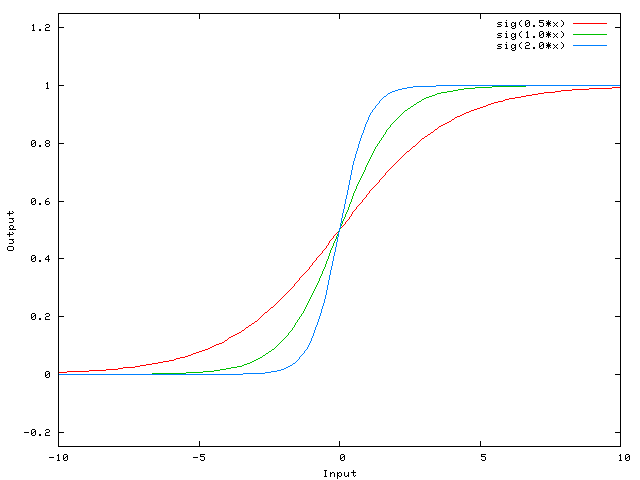 Changing the weight w0 essentially changes the "steepness" of the sigmoid. That's useful, but what if you wanted the network to output 0 when x is 2? Just changing the steepness of the sigmoid won't really work -- you want to be able to shift the entire curve to the right.

That's exactly what the bias allows you to do. If we add a bias to that network, like so: 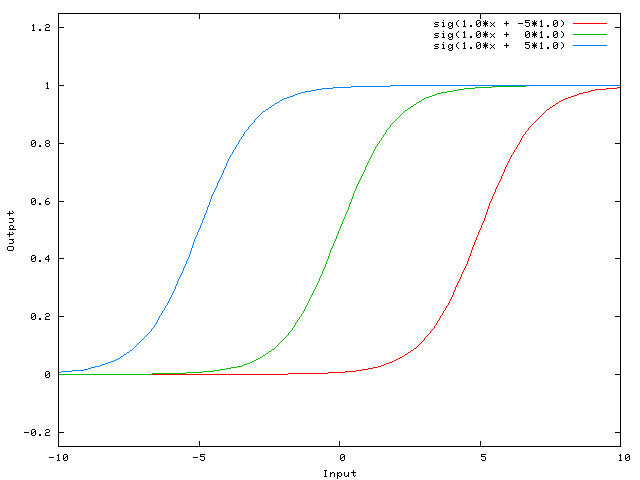 Having a weight of -5 for w1 shifts the curve to the right, which allows us to have a network that outputs 0when x is 2.

What Is An Input Layer?¶

The input layer is responsible for receiving the inputs. These inputs can be loaded from an external source such as a web service or a csv file etc. There must always be one input layer in a neural network. The input layer takes in the inputs, performs the calculations via its neurons and then the output is transmitted onto the subsequent layers.

What Is A Hidden Layer?¶

What Is An Output Layer?¶

The output layer is responsible for producing the final result. There must always be one output layer in a neural network. The output layer takes in the inputs which are passed in from the layers before it, performs the calculations via its neurons and then the output is computed.

Activation functions are functions that decide, given the inputs into the node, what should be the node’s output be? It is used to determine the output of neural network like yes or no. It maps the resulting values in between 0 to 1 or -1 to 1 etc. (depending upon the function).

Introduced in 2000 by Teh & Hinton, the rectified linear unit (ReLU) has seen very rapid adoption over the past few years. Before the ReLU activation function, the programmers generally regarded the hyperbolic tangent as the activation function of choice. Most current research now recommends the ReLU due to superior training results. As a result, most neural networks should utilize the ReLU on hidden layers and either softmax or linear on the output layer. The following equation shows the straightforward ReLU function:

Most current research states that the hidden layers of your neural network should use the ReLU activation.

For Deep learning, several Neural Network layers are connected in feedforward or feedback style also called forward propagation to pass information to each other. 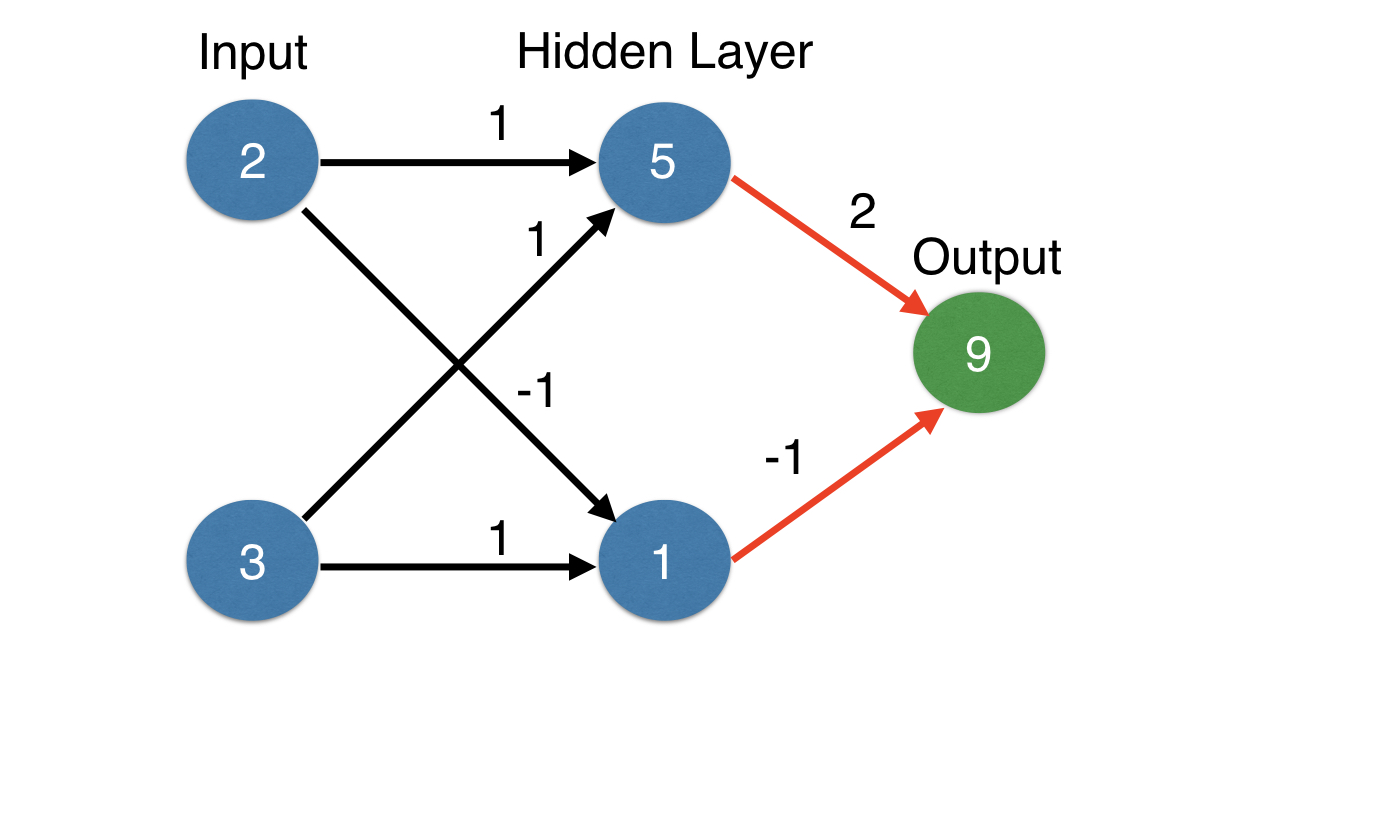 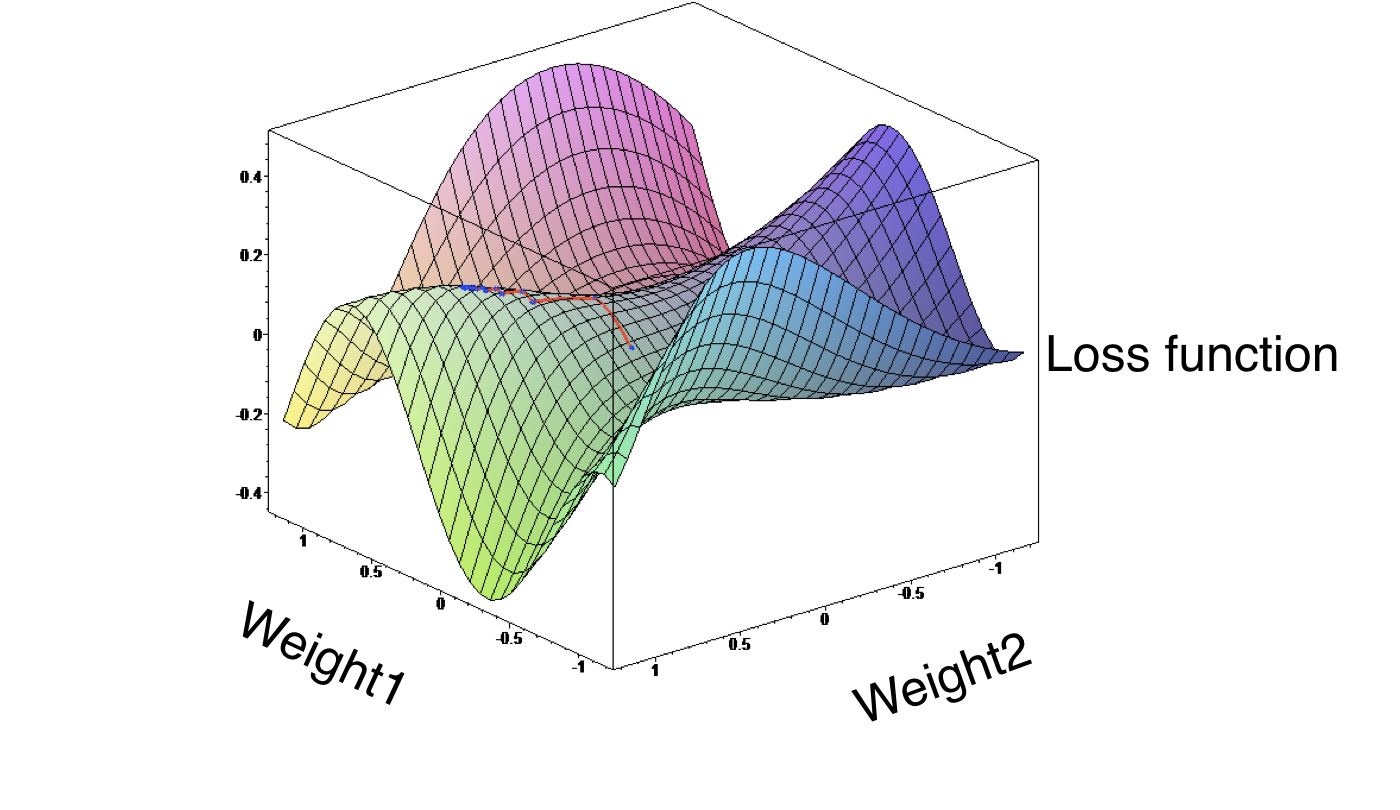 The learning rate is an important concept for Gradient descent. This is the size of the steps taken to reach the functions minium. Setting the learning rate can be complex:

To calculate the slope for a weight, need to multiply:

Back-propagation is the essence of neural net training. It is the practice of fine-tuning the process of updating the weights of a neural net based on the error rate (i.e. loss) obtained in the previous epoch (i.e. iteration). Proper tuning of the weights ensures lower error rates, making the model reliable by increasing its generalization.