Logistic regression estimates a linear relationship between a set of features and a binary outcome (usually $1$ for yes and $0$ for no), mediated by a sigmoid function to ensure the model produces probabilities. The frequentist approach results in point estimates for the parameters that measure the influence of each feature on the probability that a data point belongs to the positive or negative class.

The logistic function, also called the sigmoid function is an S-shaped curve that can take any real-valued number and map it into a value between $0$ and $1$ representing probability.

Logistic regression uses an equation as the representation, very much like linear regression.

Input values $(x)$ are combined linearly using weights or coefficient values (referred to as the Greek capital letter Beta $\beta$) to predict an output value $(y)$. A key difference from linear regression is that the output value being modeled is a binary values ($0$ or $1$) rather than a numeric value.

Where $y$ is the predicted output, $\beta_0$ is the bias or intercept term and $\beta_1$ is the coefficient for the single input value $(x)$. Each column in your input data has an associated $\beta$ coefficient (a constant real value) that must be learned from the training data.

To obtain a binary target variable, we compute the $20$-quarter rolling average of the annual growth rate of quarterly real GDP. We then assign $1$ if current growth exceeds the moving average and $0$ otherwise. Finally, we shift the indicator variables to align next quarter's outcome with the current quarter.

We use an intercept and convert the quarter values to dummy variables and train the logistic regression model as follows:

This produces the following summary for our model with $198$ observations and $16$ variables, including intercept: The summary indicates that the model has been trained using maximum likelihood and provides the maximized value of the log-likelihood function at $-66.4$.

The LL-Null value of $-136.42$ is the result of the maximized log-likelihood function when only an intercept is included. It forms the basis for the pseudo-R2 statistic and the Log-Likelihood Ratio (LLR) test. The pseudo-R2 statistic is a substitute for the familiar R2 available under least squares. It is computed based on the ratio of the maximized log-likelihood function for the null model $m_0$ and the full model $m_1$.

The values vary from $0$ (when the model does not improve the likelihood) to 1 where the model fits perfectly and the log-likelihood is maximized at $0$. Consequently, higher values indicate a better fit.

Regularization can be used to train models that generalize better on unseen data, by preventing the algorithm from overfitting the training dataset by penalizing the models coefficients.

Here, we fit a logistic regression model for the various types of regularization and without regularization. Then we evaluate with 3-fold cross validation.

To determine how strong we penalize our coefficients for logistic regression we adjust the $C$ parameter. The $C$ parameter is a penalty term used to disincentivise and regulate against over fitting. 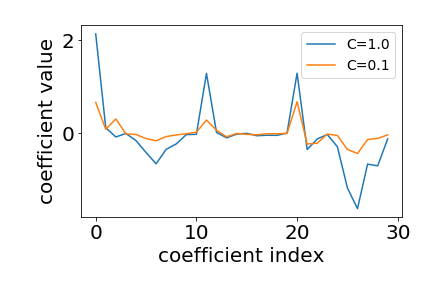 Here we evaluate $20$ parameter values for $C$ using cross validation. We then use the roc_auc_score to compare the predictive accuracy across the various regularization parameters as follows:

We can again plot the accuracy result for the range of hyperparameter values alongside the coefficient path that shows the improvements in predictive accuracy as the coefficients are a bit shrunk at the optimal regularization value $10^4$: